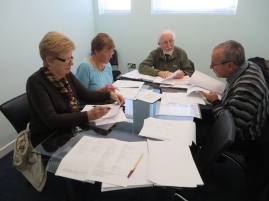 One of the fascinating features of the ‘Burrard Neale story’ is that we know the names of all those whose contributions funded the erection of the beautiful Walhampton obelisk – because we have ‘A LIST OF THE SUBSCRIBERS TO THE PUBLIC TESTIMONIAL TO THE LATE SIR HARRY BURRARD NEALE, BARONET, RECENTLY ERECTED AT WALHAMPTON, NEAR LYMINGTON HANTS.’

We know that the maximum (declared) donation was £50.0.0d. – made by 3 members of the Royal Family and a number of other key individuals – whilst, at the other extreme, there were contributions of the proverbial ‘widow’s mite’.  In total, some 200 people subscribed £1,482.3.0d which, as far as we can tell, met the cost of the monument.

The majority of the donors were local – and so are recognisable to local historians such as Jude James, the author and President of the Lymington & District Historical Society.
On the other hand, some were from further afield and their names currently mean little to us.  Hopefully, all this is about to change!  Members of the Lymington U3A Genealogy Group have kindly offered to research a cross-section of the subscribers – to find out more about them and their connections with Sir Harry … and maybe trace a few descendants …