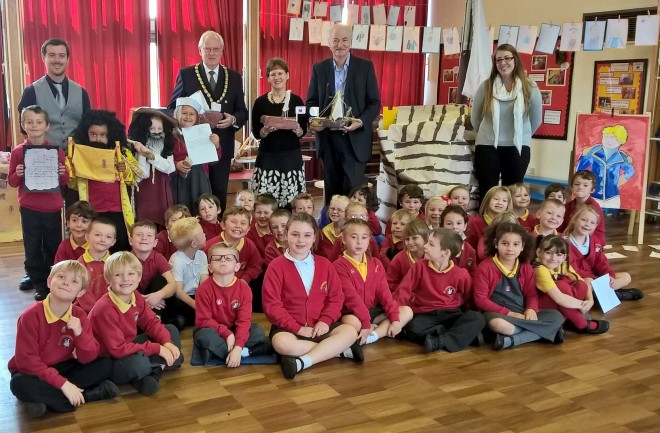 Michael White, Mayor of Lymington and Pennington and members of the Burrard Neale 250 Team Chairman Don Mackenzie and Schools Liaison Lead Pam Morrissey, visited Pennington Infants School this Tuesday the 20th of October to see and hear the wonderful way the school and teachers have used the “Life and Times” of Lymington naval hero Admiral Sir Harry Burrard Neale in their curriculum with Year Two children.

Using education material originally designed for the Burrard Neale 250 Schools programme and put together by Burrard Neale 250 team member Pam Morrissey, the school has really embraced the topic and used the Life and Times on Admiral Sir Harry Burrard Neale in a host of imaginative and informative ways.

The school led by Head Teacher Sarah Draper and teacher Mathew Butcher have led the children into research of the conditions endured by sailors in the Royal Navy during the Napoleonic Wars and studied the lives the sailors led including their diet, their living condition, their poor pay and the effects of the battles they undertook.

Pupils described to the Mayor how sailors who were flogged chose their friends to carry out the punishment hoping they would go easy on them so that they would do the same if they were flogged. This led to the phrase “you scratch my back and I’ll scratch yours”

Children wrote diaries as if they were sailors at the time and wrote formal letters to Sir Harry complaining about their conditions and used laptops to learn how to set out the letter using the correct fonts etc.

Using Google maps they studied the various places in Lymington that were associated with the life of Sir Harry and made a pictorial map of the town learning about maps and how to read them.

Art lessons were used to study pictures of Sir Harry in his full naval uniform and pupils all painted a picture of Sir Harry as well as making models of his ship.

A large model of his ship enabled pupils to role play the life of sailors helping them to develop their speaking skill and leading to improved confidence in the class.

The Mayor and Burrard Neale Team were extremely impressed with the range of ways that the school and the teachers had used the life of Sir Harry to enhance and inform so many different aspects of their school curriculum as the as well and the huge enthusiasm and knowledge of the pupils for the topics covered in this way.

Speaking after the visit Don Mackenzie Chairman of the Burrard Neale 250 Project said:

“One of our key aims when starting out with the Burrard Neale 250th Anniversary project was to bring the achievements of Sir Harry to wider public notice and Pam Morrissey our School Liaison Lead has worked tirelessly with local schools to help them introduce Sir Harry and his achievements both nationally and locally to their pupils.From the fantastic show put on for us by Pennington infants Schools we are certainly achieving this important aim of the project.

Eight schools took part in our Burrand Neale Design a Poster competition and several schools have introduced the topic of Sir Harry into their curriculum. However Pennington Infants has been one of the most enthusiastic supporter of the Burrard Neale 250 project and have really used it as a springboard to take them into many aspects of the learning experience at the school, including art, models making, study of the life and times of sailors in Napoleonic times, role play and many other areas of school work.

The evident enthusiasm of the children and their interested in what they had learnt was very compelling and we were all very impressed with the school and the teachers involved.

We are also very pleased that the New Forest National Park Authority Education Service have adopted our material for their curriculum recommendations for all New Forest schools and schools in the Forest interested in introducing study on Sir Harry into their curriculum can find information on their website.

We look forward to working with Pennington Infants and other local schools in the future when hopefully further generations of children in Lymington can learn about this important local hero.”