Whilst ‘Burrard Neale 250’ is planned to be one holistic project – with the objective of raising awareness of Sir Harry, his life and times, and renewed pride in his achievements – for workload and financial reasons, it is expected to be conducted in 5 phases:

1. Raising awareness of the project – especially through written and verbal communication with New Forest, Lymington and Solent organisations – and recruiting support.

2. Restoring the Walhampton site (excluding the Monument) and introducing interpretation and seating – making it once again an attractive, interesting and popular place to visit. Whilst the larger arboreal works and improvements to the ‘Solent Way’ and its drainage will require contractors, it is proposed that all landscape work will be coordinated through one Landscape Plan, drawn up with the assistance of the Hampshire Gardens Trust, and that a significant proportion of the lighter work will be undertaken by volunteers. It is hoped that restoration of the smaller ‘Gas Lamp’ and St. Thomas’ monuments will also be achievable in this phase.

1850s watercolour of The Solent, viewed from Walhampton, showing the Monument

3. Restoring the Walhampton Monument to its former glory. This work, to the Grade II* structure, will necessitate the employment of specialist craftsmen and, principally due to water penetration, and settlement and breakage of the surrounding slabs, is forecast to cost up to £70,000 – for which grant funding is being sought and donations will be gratefully received.

4. Maintaining the attraction of the Walhampton site, via the continued attention of ‘Friends of Sir Harry’ volunteers.

5. Celebrating Sir Harry’s 250th Anniversary – by linking the Admiral with a series of community events, throughout 2015, of attraction to as many Lymingtonians as possible! 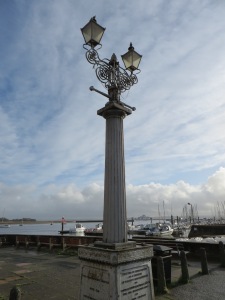 In terms of timings, Phase 1 commences immediately, with this brochure and, if the Phase 2 landscaping of the Walhampton site is to be achieved ahead of Sir Harry’s September 2015 anniversary, the bulk of this work needs to be undertaken in Autumn /Winter 2014 / 15 – the right time of year for the trees and birds.

It is proposed that recruitment of ‘Friends of Sir Harry’ – to participate in this Autumn /Winter work – should start as soon as possible, whilst the timing of the Phase 3 restoration of the Walhampton Monument will be dictated by its funding.

Phase 5 celebrations are planned to start before the close of 2014 [Sir Harry is already scheduled to feature in a St. Barbe exhibition and Historical Society talk this winter] and to run throughout 2015.